One worker and her work…Sarah Smith of Golders Green 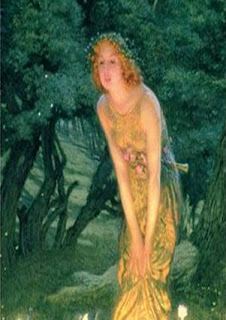 This past Sunday September 13, 2015, I (Pastor Matt) preached a sermon from Genesis 1 and 2 entitled, “The Work and the Workers.” I argued that God created and redeemed humanity for the purpose of doing good work. This work will be like God’s work–bringing order out of chaos, light to dark places, and life where there is death.

In C.S. Lewis’ beloved book The Great Divorce, we read of an example of one faithful worker. The scene before you takes place near the entrance of the High Country (heaven) where a conversation is happening between two departed souls. They are observing a glorious being that one nearly mistakes as the Virgin Mary…but the conversation reveals the identity of the person in this conversation:

Then, on the left and right, at each side of the forest avenue, came youthful shapes, boys upon one hand, and girls upon the other. . . . Between them went
musicians: and after these a lady in whose honour all this was being done. . .
. Only partly do I remember the unbearable beauty of her face.“Is it? … is it?” I whispered to my guide.
“Not at all,” said he. “It’s
someone ye’ll never have heard of. Her name on earth was Sarah Smith  and she lived at Golders Green.”
“She seems to be…well, a person
of particular importance?”
“Aye. She is one of the great ones.
Ye have heard that fame in this country and fame on Earth are two quite
different things….
“And who are all these young men and women on
each side?”
“They are her sons and daughters.”
“She must have had a very large
family, Sir.”
“              Every
young man or boy that met her became her son – even if it was only the boy that
brought the meat to her back door. Every girl that met her was her daughter.”
“Isn’t that a bit hard on their own parents?”
“No. There are those that steal
other people’s children. But her motherhood was of a different kind. Those on
whom it fell went back to their natural parents loving them more. Few men
looked on her without becoming, in a certain fashion, her lovers. But it was the
kind of love that made them not less true, but truer, to their own wives.”
“And how…but hullo! What are all
these animals? A cat-two cats-dozens of cats. And all those dogs…why, I can’t
count them. And the birds. And the horses.”
“They are her beasts.”
“Did she keep a sort of zoo? I
mean, this is a bit too much.”
“Every beast and bird that came
near her had its place in her love. In her they became themselves. And now the
abundance of life she has in Christ from the Father flows over into them.” I looked at my Teacher in amazement.

“Yes,” he said. “It is like when you throw a stone into a pool, and
the concentric waves spread out further and further. Who knows where it will
end? Redeemed humanity is still young, it has hardly come to its full strength.
But already there is joy enough in the little finger of a great saint such as
yonder lady to waken all the dead things of the universe into life.”