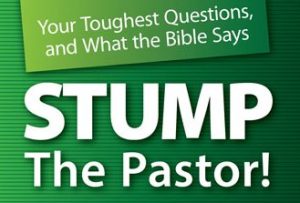 The second Stump the Pastor question this week is this:

“Why did Jesus say that the Prince of this world is Satan if He (Jesus) was given all authority on heaven and on earth?”

This is a fantastic question.

You are right that Satan is described as a Being with immense power and influence. It’s in John 12:31; 14:30; 16:11 where Jesus calls Satan “the prince of this world.” Paul calls Satan “the ruler of the kingdom of the air” (Ephesians 2:2). Clearly, Satan still has a measure of power in this world.

Note also, that Jesus says Satan’s power has been impacted by Jesus’ first coming: John 12:31-32 “Now is the time for judgment on this world; now the prince of this world will be driven out. And I, when I am lifted up from the earth, will draw all people to myself.”

So too, Christians have power over this powerful enemy. Luke 10:17-20 reads this way:

The seventy-two returned with joy and said, “Lord, even the demons submit to us in your name.” 18 He replied, “I saw Satan fall like lightning from heaven. 19 I have given you authority to trample on snakes and scorpions and to overcome all the power of the enemy; nothing will harm you. 20 However, do not rejoice that the spirits submit to you, but rejoice that your names are written in heaven.”

Observe that Jesus warns those 1st century Christians that power over darkness (through Christ) is not to be main focus of our rejoicing. Rejoice in your salvation. Beware of directly mocking or messing with Satan at all, says Jude: In the very same way, on the strength of their dreams these ungodly people pollute their own bodies, reject authority and heap abuse on celestial beings. 9 But even the archangel Michael, when he was disputing with the devil about the body of Moses, did not himself dare to condemn him for slander but said, “The Lord rebuke you!” (NIV  Jude 1:8-9) If the great archangel Michael steers clear of the great enemy, we would be wise to avoid him as well.

Now, back to the question at hand. It appears that Satan has limited authority under Christ’s universal authority. Satan has this earth. This is his realm. But he’s on a leash. He’s a lion, but a caged lion. A dragon, but a crippled, bleeding, and deranged dragon. Why doesn’t Jesus overthrow Him now? We don’t really know. Jesus will crush Satan in the days to come (see Romans 16:19-20; Revelation 19-20). Jesus is LORD of EVERYTHING; Satan’s lordship is temporary and limited. We can be saved out of the kingdom of darkness and brought into the Kingdom of the Son (Colossians 1:12-14). Satan’s power is primarily in his lies. He deceives, tempts, and lures, but it appears this serves a glorious end purpose that will eventually bring glory to God and be a great good to us (Rom. 8:28). Resist the devil, submit to God.