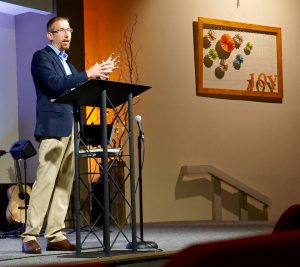 After being requested on several occasions to create a recommended reading list, I (Pastor Matt) am finally willing to acquiesce. You can download a pdf of this information here: https://cornerstone-marion.org/docs/Recommended_Reading_List.pdf

Under each major category, I offer suggestions in three tiers—beginner, intermediate, and advanced.

A beginner book is usually under 200 pages, reads easily for those in high school or beyond, and serves as an important introduction to the theme.

An intermediate book is anywhere from 150-350 pages, goes into greater depth than a beginner book, and is usually a more difficult read because of vocabulary, developed reasoning/thoughts, etc.

An advanced book has no maximum page length and is suited for those with a good foundation in basic Christian beliefs, the Bible, and some knowledge of literature, culture, and the arts.

On Becoming a Christian

Beginner: Why I am a Christian by John Stott

Beginner: Reason for God by Tim Keller, More than a Carpenter by Josh McDowell, The Case for Faith and The Case for Christ by Lee Strobel

Advanced: The God Who is There by Francis Schaeffer, Christian Apologetics by Norman Geisler

On Growing as a Christian

Beginner: Crazy for God by Francis Chan, Screwtape Letters by C.S. Lewis, What’s So Amazing About Grace by Philip Yancey, The Me I Want to Be by John Ortberg, The Purpose-Driven Life by Rick Warren, What is the Gospel by Greg Gilbert, You Can Change by Tim Chester, Little Pilgrim’s Progress by Helen Taylor (good to be read by or to elementary age kiddos or adults who think John Bunyan’s work and language is a bit heavy)

Intermediate: True Spirituality by Francis Schaeffer, The Emotionally Healthy Church by Peter Scazzero, The Celebration of Discipline by Richard Foster, The Pilgrim’s Progress by John Bunyan, Desiring God by John Piper, The Pursuit of God by A. W. Tozer, A Long Obedience in the Same Direction by Eugene Peterson, On Mortification of Sin by John Owen, The Imitation of Christ by Thomas à Kempis

Advanced: The Divine Conspiracy and The Spirit of the Disciplines by Dallas Willard, The Cost of Discipleship by Dietrich Bonhoeffer, Holiness by J.C. Ryle

Beginner: “Born to Reproduce” by Dawson Trotman (a short article), Disciples are Made, Not Born by Walter Henrichsen

Advanced: The Mission of God by Chris Wright, The Cost of Discipleship by Dietrich Bonhoeffer, Reaching Out by Henri Nouwen

On Christian Beliefs and Doctrine

Intermediate: Evangelical Convictions by the Evangelical Free Church of America, Knowing God by J.I. Packer, Redemption: Accomplished and Applied by John Murray, The Cross of Christ by John Stott

Advanced: Christian Theology by Millard Erickson, Systematic Theology by Wayne Grudem, The Institutes of the Christian Religion by John Calvin

Beginner: Spiritual Leadership by J. Oswald Sanders, Be the Leader You Were Meant to Be by Leroy Eims

Intermediate: In the Name of Jesus by Henri Nouwen, Liberating Ministry from the Success Syndrome by Kent Hughes, Brothers We are Not Professionals by John Piper

On Impacting Communities and the Surrounding Culture

Beginner: The Church of Irresistible Influence by Robert Lewis, Out of the Saltshaker and into the World by Rebecca Manley Pippert

Intermediate: Missional Church edited by Darrel Gruder, How Now Shall We Live by Colson and Pearcey, Let Justice Roll Down by John Perkins, Rich Christians in an Age of Hunger by Ron Sider, The Hole in the Gospel by Richard Stearns

Advanced: To Change the Word by James Hunter, The Mission of God by Chris Wright

Intermediate: How to Read the Bible for all Its Worth by Fee and Stuart, Eat This Book by Eugene Peterson

Advanced: Introduction to Biblical Interpretation by Klein, Blomberg and Hubbard

On the Christian Church

Beginner: 9 Marks of a Healthy Church by Mark Dever, Life Together by Dietrich Bonhoeffer

Intermediate: Total Church by Chester and Timmis, The Body by Charles Colson, The Trellis and the Vine by Marshall and Payne

Advanced: The City of God by St. Augustine, The Didache

On Sharing Christ (Evangelism and Missions)

Beginner: How to Give Away Your Faith by Paul Little

Intermediate: Evangelism and the Sovereignty of God by J.I. Packer, Let the Nations be Glad by John Piper

Advanced: The Mission of God by Chris Wright, The Next Christendom by Philip Jenkins

On Preaching and Teaching

On God’s View of Work and Vocation

Advanced: Business as a Calling by Michael Novak

Intermediate: Sacred Marriage by Gary Thomas, The Meaning of Marriage by Tim and Kathy Keller

On Suffering and Pain

Beginner: A Grief Observed and The Problem of Pain by C.S. Lewis, A Letter of Consolation by Henri Nouwen

Intermediate: When God Weeps by Joni Earekcson Tada, Suffering and the Sovereignty of God by John Piper

Authors who I will read on almost anything (though I don’t necessarily endorse everything they write):